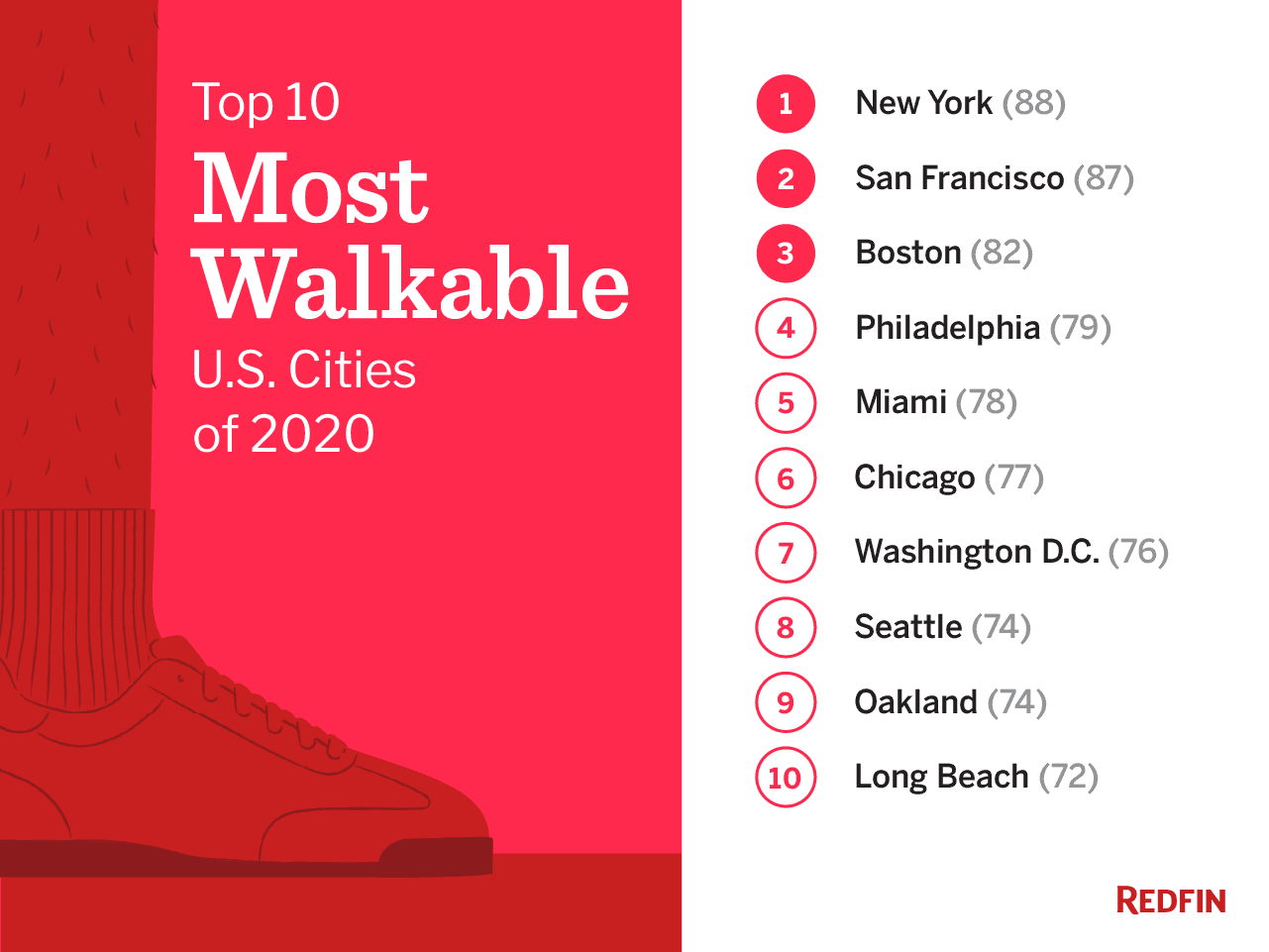 New York, San Francisco and Boston are the most walkable cities in the U.S. in 2020.

Those three cities, along with Philadelphia, Miami, Chicago, Washington, D.C., Seattle and Oakland, have reigned as the nine most walkable in the U.S. for the last five years. Long Beach, CA has been number 10 since it overtook Baltimore in 2016.

That’s according to rankings from Walk Score®, a Redfin company that rates the walkability of cities, neighborhoods and addresses. Cities where daily errands do not require a car score 90 points and above, a score of 70 to 89 points means most errands can be accomplished on foot and a score of 50 to 69 indicates that some errands can be completed on foot.

Clocking in at 87.4 this year, San Francisco has reached its highest Walk Score ever.

“The sheer number of people moving into San Francisco for jobs and the creation of infrastructure to accommodate them has created a ripple effect for walkability,” said local Redfin agent Chris Dawe. “I’ve lived here my entire life and I’ve seen the makeup of the city change from pockets of walkable neighborhoods joined by cars and public transit to one interconnected area. As housing prices have gone up and the more far-flung neighborhoods have become more popular, the city adds infrastructure, businesses move in and they become more walkable and more connected to other areas.”

“For example, Noe Valley became popular and more walkable about 10 years ago, but then the desirability of the neighborhood started pricing people out. Homebuyers began moving to Dolores Street, then the Mission, and the city responded by adding infrastructure that makes those places more walkable and interconnected,” Dawe continued. “Almost every homebuyer mentions walkability as a priority. They want to walk to the grocery store, to coffee shops or to the park. And now that’s possible in almost every neighborhood inside the city.”

Since we last published Walk Score rankings in 2017, Miami and Washington, D.C. each lost about 1.5 points, and New York lost almost one, but each retained its place in the rankings.

Oakland; Long Beach, CA; Portland, OR and Omaha, which each picked up around two points, had the biggest Walk Score increases since 2017.

“A lot of my homebuying clients seek out walkable neighborhoods in Long Beach because it’s a way to get a small-town feeling in a big city. In certain neighborhoods, people run into each other all the time because they’re out running errands, walking the dog or keeping an eye on neighborhood kids playing outside,” said local Redfin agent Costanza Genoese-Zerbi. “Second Street, Belmont Shore, Belmont Heights, Naples, Alamitos Heights and Belmont Park, all of which are within walking distance of schools, stores, restaurants and parks, have become more and more popular over the last few years.”

Baltimore, which lost four points to hit 65, saw the biggest Walk Score decline of any U.S. city. It’s followed by Bakersfield, CA and San Antonio, which each dropped three points to 34 and 35, respectively.

Walk Score is available for any address in the U.S. and Canada. We also have rankings for more than 2,800 cities and over 25,000 neighborhoods.

Go to Walk Score’s website to see the Walk Score rankings for U.S. and Canadian cities. If you’re interested in a specific city or state, use the following URL structure with your state abbreviation: https://www.walkscore.com/WA/

Check out the most walkable Canadian cities of 2020.

How Much Does Walkability Increase the Value of a Home?

5 Most Walkable Canadian Cities of 2020

How Much is One Point of Transit Score Worth?