Three of the 10 most popular migration destinations in July were in the Sunshine State, which faces high risk from storms and rising sea levels. Nationwide, 30% of Redfin.com users looked to move to a new metro last month, a slight decline from the second quarter.

Miami, Sacramento, Phoenix, Las Vegas and Tampa were the most popular migration destinations among major U.S. metros in July, meaning they had the biggest net inflows. A net inflow is a measure of how many more Redfin.com home searchers looked to move into a metro than leave.

The latest migration analysis is based on a sample of about 2 million Redfin.com users who searched for homes across 112 metro areas in July, excluding searches unlikely to precede an actual relocation or home purchase. To be included in this dataset, a Redfin.com user must have viewed at least 10 homes in a particular metro area, and homes in that area must have made up at least 80% of the user’s searches.

Miami has consistently made the top 10 list since Redfin began regularly tracking quarterly migration in 2017, but has never taken the number-one spot until now. It had a net inflow of 7,610 Redfin.com users in July, more than triple the 2,216 net inflow of a year earlier. Two other Florida metros—Tampa and Cape Coral—were also in the top 10 last month and experienced year-over-year increases in net inflow.

Table: Top 10 Metros by Net Inflow of Users and Their Top Origins

*Combined statistical areas with at least 500 users in July 2021

†mong the two million users sampled for this analysis only

“Miami has always been a melting pot, but the pandemic has brought even more out-of-towners to the area because so many people can now work from wherever they want. Homebuyers are moving here from all over the map—Atlanta, Cincinnati, New York, Columbia, Mexico City, Pittsburgh and Philly, to name a few,” said Miami Redfin real estate agent Milagros Alvarez. “The beaches, warm weather and low taxes are the major draws. Florida has also been much less shut down than other states during the pandemic, which some house hunters see as a positive.”

While Miami’s climate is a selling point for many homebuyers, it also poses risks. The city is one of the most vulnerable in the world when it comes to damages caused by coastal flooding and storms. More than half (59%) of Miami’s properties face some level of flood risk, according to First Street Foundation’s Flood Factor. Sea levels in Miami-Dade County are projected to rise two feet or more by 2060, threatening to displace many residents. The region also faces extreme heat risk. Still, most clients Alvarez works with don’t see these factors as dealbreakers.

“The homebuyers I talk to rarely mention climate change. Most of them aren’t concerned,” Alvarez said. “A lot of people seem to have this idea that it won’t impact them in their lifetime, so it doesn’t need to be a consideration when buying a home.”

“Many people who move to Miami are thinking about the short-term benefits of living in such a vibrant, beautiful, and prosperous city,” said Redfin Chief Economist Daryl Fairweather. “We know from the recent UN climate report that places like Miami will see the impacts of climate change within the next thirty years. Miami homebuyers should think about how they can make their homes more resilient to climate change, and how their finances would be impacted if their homes lost value.”

A separate Redfin analysis last week found that overall, more people are moving in than out of areas facing high risk from climate change. The 50 U.S. counties with the largest share of homes facing high heat risk saw their populations increase by an average of 4.7% from 2016 through 2020 due to positive net migration. The 50 counties with the largest percentage of homes facing high flood risk experienced average population growth of 1.9%.

San Francisco, Los Angeles, New York, Washington, D.C. and Boston saw more Redfin.com users move away than any other metro areas in July, meaning they had the biggest net outflows. A net outflow is a measure of how many more Redfin.com home searchers looked to leave a metro than move in, out of a sample of 2 million users.

Big, expensive cities normally lose the most residents. That trend accelerated during the pandemic as remote work gave people the flexibility to leave expensive job centers for relatively affordable places.

Yet, a handful of the metros that experienced the largest outflows in July saw fewer people leaving than a year earlier—likely because many of the pandemic restrictions that made them unattractive places to live have now been lifted.

Table: Top 10 Metros by Net Outflow of Users and Their Top Destinations

*Combined statistical areas with at least 500 users in July 2021

Nationally, Interest in Relocating Declined Slightly in July But Remains Above Pre-Pandemic Levels

Nationwide, 29.8% of Redfin.com users looked to move to a different metro in July, down slightly from 31.1% in the second quarter but up from 27.8% during the same month last year. 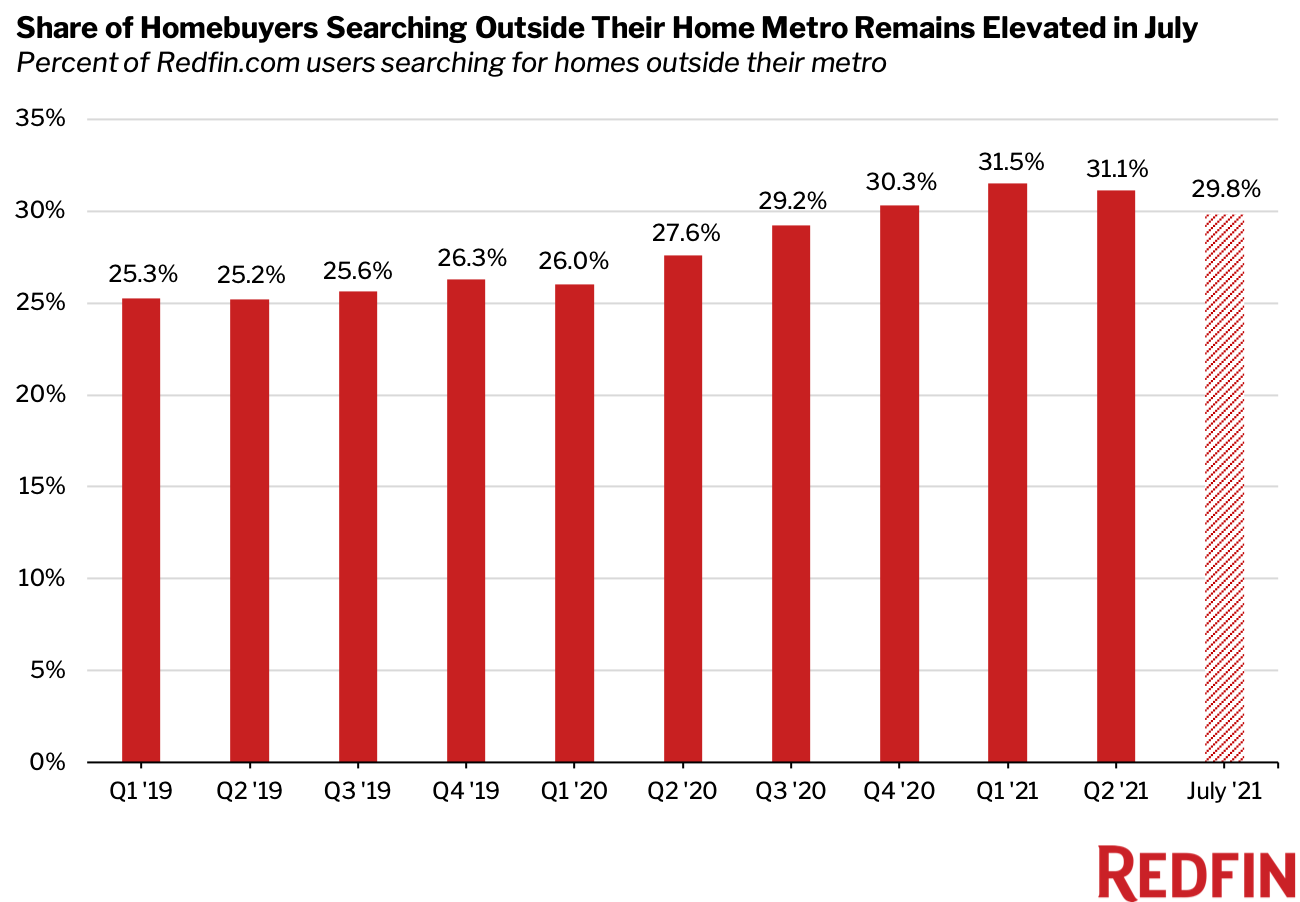 Remote work and record-low mortgage rates at the start of the pandemic fueled a moving spree among Americans, many of whom were able to prioritize affordability above proximity to the workplace for the first time. But as housing demand has increasingly outpaced supply, some of the most popular migration destinations have become prohibitively expensive for homebuyers. That may be driving a slight decline in the share of house hunters searching outside their metro, according to Fairweather.

“At the beginning of the pandemic, there was a real price advantage for folks who were moving to the suburbs, rural areas and even growing cities like Austin. That advantage has disappeared in many places due to surging home values. Home prices in Austin are 39% higher than they were last summer,” Fairweather said. “Despite record-high housing prices, interest in relocating is still well above pre-pandemic levels. That’s because so many people now have the flexibility to do their jobs from anywhere, with many companies starting to establish permanent remote-work policies.”