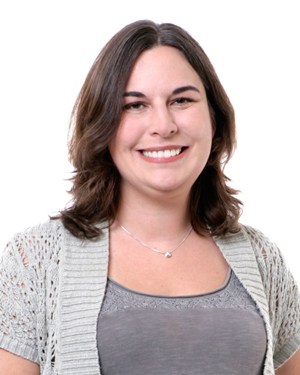 Bridget Frey is one of just a handful of female executives holding the top technology spot. At Redfin, she’s in good company. As CTO, she oversees a large group of engineers, a quarter of whom are women. While that’s already above the industry average, Bridget and her team are working to grow this number.

“I learn a lot listening to the way young women think about navigating their careers,” Bridget says. “There are so many paths and so many choices along the way, and I’m happy to share my own experiences with people who are navigating some of the same experiences I’ve had in the past.”

Bridget’s path to CTO has involved a combination of raw intellect, academic discipline and smart career decisions. Her ability to communicate effectively with colleagues of all backgrounds — not just fellow engineers — has been integral to her success.

As Bridget got older, she moved on from PC games to programming in BASIC and Pascal. “I loved working with people, and joined the computer programming team in high school. It was fun to collaborate with everyone during the competitions,” she says.

Taking ‘Busy’ to a Whole New Level at Harvard

Her talent caught the eye of the Harvard admissions board. She was offered a spot at the prestigious university and was awarded several scholarships. As a junior she received one of two Microsoft National Women’s Technical Scholarships, which paid for her tuition senior year. She was even profiled as one of the seven busiest students at Harvard.

“As an undergraduate, I wanted to try as many activities as I could fit into my schedule: I was the co-editor-in-chief of the weekly newspaper; I was a teaching fellow for several computer science courses; I had summer internships at Motorola, Marble Associates and Microsoft; and I volunteered a lot.”

After graduating in 1999, Bridget set her sights on San Francisco, where the majority of innovation was happening.

A Crazy Time in Tech History

It wasn’t long before Bridget discovered Plumtree Software, which was co-founded by Glenn Kelman, who is now CEO of Redfin. “I liked the people at Plumtree, and the collaborative nature of the teams. It was also exciting to work with major companies like Procter & Gamble.”

Bridget was at Plumtree for four years, during which the company grew from 40 to 400 employees, and had an initial public offering (IPO) in 2002.“It was an amazing time to be working in tech and living in San Francisco,” Bridget says. “I went to a lot of dot-com parties, and I actually met my husband at one of them. We witnessed the meteoric rise of the industry, and then the crash.”

Fortunately Plumtree fared well through the crash. “It was a novel product that a lot of companies needed,” Bridget says. “Eventually BEA Systems bought the company, and then Oracle bought BEA.”

In 2003, Bridget’s husband Devin entered a post-doc program at Harvard, which took them back to Boston. She stayed with Plumtree, and worked from home. After a few years she left for an opportunity to work for IMlogic, which built instant messaging security software. After IMlogic, she jumped to a chemotherapy software company called IntrinsiQ. At each company she managed large teams of engineers.

In 2006 she became pregnant with her first son, Graham, and started contracting for Lithium Technologies, which let her work from home full-time and be with Graham during the day. After only a few weeks, Lithium offered her a management position; a testament to her leadership. A few years later Bridget had her second son, Wilson, and continued to work for Lithium.

“I appreciated the opportunity to be with my sons while they were young,” she says. “I enjoyed having lunch with them, being there when they were sick, and not having to commute in and back every day.”

In 2011, she moved to Seattle, and used a Redfin real estate agent to buy and sell her home. She had stayed in touch with her former Plumtree colleague, Glenn, and was impressed with the service and the company.

Finding Her Way to Redfin When her sons were older, she decided it was time to stop working from home, and got in touch with Glenn. “I saw a huge opportunity for Redfin to make the process of buying and selling a home less complicated and less stressful through technology. I loved the company’s mission to reinvent real estate in the consumer’s favor; it has always been important to me to work for a company with a mission I believe in. The people were amazing, with a collaborative spirit and tons of passion.”

The company seemed like a great fit, but like many parents, Bridget wanted to make sure that the position would offer enough flexibility so that she could still drop off and pick up her children from daycare and school each day.  Before she accepted an offer, Bridget and Glenn had a conversation about her schedule. Bridget made it clear that she would make the most out of the time she was in the office, and Glenn promised to find a way to make her desired schedule work.

“Real estate is a huge market and we can really make a difference for people. I love the connection with our customers; what we’re doing really matters,” Bridget says. “I also love working with real estate agents; having them at the same company creates a great partnership between agents and engineers. The ideas that we come up with are better when we work together.”

Now, Bridget is an advocate for other women in technology and those who hope to get into technology. She often participates in the Redfin Women in Technology group, which discusses diversity issues and ways women can work together and support one another in the industry. In addition to leading by example, as a manager and mentor, she provides her advice and guidance to men and women at Redfin who aspire to become leaders themselves.

Bridget also shares her experience with others at industry events; on June 4 she will be discussing issues around attracting, retaining and advancing women in technology at the ARA Seattle Women in Business & Tech event held at Redfin’s Seattle headquarters.

We can’t wait to see what she does next.