That’s roughly equal to the GDP of France, or the combined market value of Amazon and Facebook.

Redfin forecasts a record $2.53 trillion worth of home sales in America in 2021—a 17% year-over-year gain that would mark the largest annual increase in percentage terms since 2013. To put $2.53 trillion into perspective, it’s roughly equal to the value of Amazon.com Inc. and Facebook Inc. combined, or the 2020 gross domestic product (GDP) of France. Please note that historical data is not adjusted for inflation. 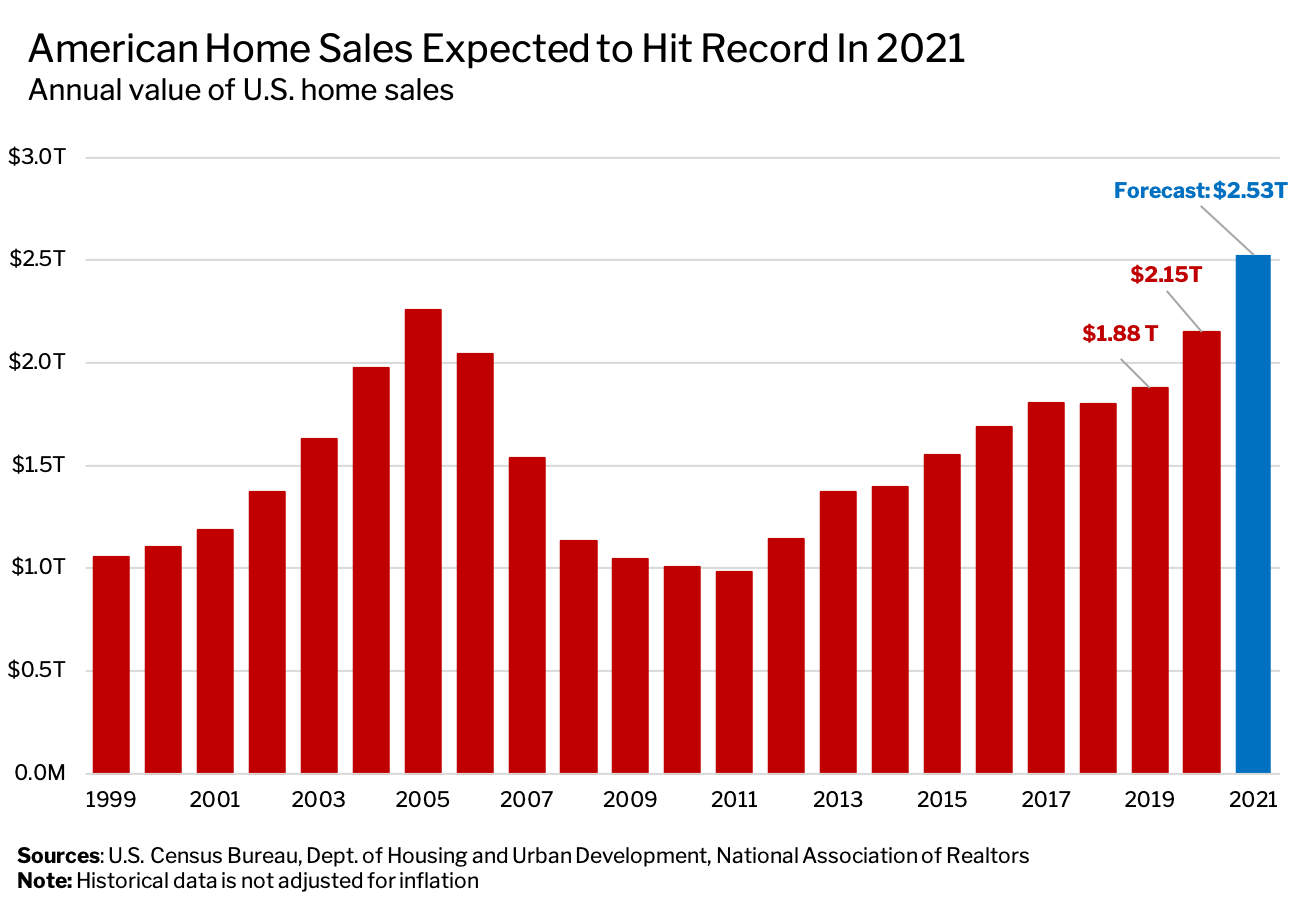 The U.S. housing market has undergone a meteoric rise during the coronavirus pandemic, fueled by record-low mortgage rates and a wave of migration made possible by remote work. Almost two-thirds (60%) of people expect to continue working from home at least part time after the pandemic, according to an April survey of Redfin.com visitors who have moved to a different metro area in the last year. These factors—alongside an acute housing shortage—helped March become the hottest month in housing history, with home values, price growth and selling speed all hitting new heights.

In short, the combination of rising demand (home sales) and surging home prices is fueling the increase seen in the chart above. While home prices could grow more slowly if mortgage rates rise, that would result in a more balanced housing market, which could actually lead to more home sales, according to Redfin Chief Economist Daryl Fairweather.

“We expect 2021 to be an even more active year for the housing market than 2020 because homebuyers have a better sense of what the future looks like,” Fairweather said. “Employers are providing clarity on permanent remote-work policies, the economy is recovering and mortgage rates remain low. All of these factors mean that we’ll likely see even more buyers enter the market this year and in 2022.” The South has consistently held the top spot, but has inched further ahead in recent years. This is likely because it has more vacant land on which to build, and has attracted scores of out-of-town homebuyers who are in search of affordability and space, Fairweather said. Seven of the 10 U.S. metros with the biggest net inflows in the first quarter were in the South. Net inflow is a measure of how many more Redfin.com home searchers looked to move into a metro than leave.

“A lot of wealth from the coasts is shifting South,” Fairweather said. “Affluent homebuyers from New York and San Francisco have moved to places like Florida and Texas during the pandemic, which has fueled home sales and driven up prices in those areas.”

*Values calculated as of the first week of May 2021

“Offering above a seller’s asking price was never the norm in Atlanta like it was on the West Coast, but now it is. Today, it’s typical for a buyer to bid $50,000 or $70,000 over the list price in order to win,” said Andrew Kolodey, a Redfin real estate agent in Atlanta. “We’ve never experienced this level of competition. A bidding war here used to mean up to five offers. Now it means 15 to 20 offers.”

Redfin’s 2021 forecast of the value of U.S. home sales is based on the number of U.S. home sales we expect in 2021 (roughly 7.5 million) multiplied by the expected average price of those homes ($333,333). To estimate the number of home sales and the average price of homes, we considered several factors, including inventory, mortgage rates, yield curves, job growth, disposable per capita incomes and building permits.

Historical data is based on the actual number of homes sold in past years multiplied by the average price of those homes. These statistics come from the U.S. Census Bureau, the National Association of Realtors and the U.S. Department of Housing and Urban Development. Historical data is not adjusted for inflation.